The Effect of Alloy Elements On Steel Material

Alloying elements in steel can make steel materials get better performance and process performance. In terms of performance, higher strength and toughness can be obtained, or better low temperature toughness, higher creep strength, hardness and oxidation resistance at high temperatures, or good corrosion resistance. In terms of process performance, adding alloying elements can obtain better thermoplasticity, cold deformability, machinability, hardenability and weldability. This is mainly because the addition of alloying elements changes the internal structure of steel and iron, resulting in the interaction between alloying elements and iron and carbon, which changes the stability of each phase in steel, thereby forming a new structure. Differences in atomic structure, atomic size, and crystal lattice between these elements are the source of these changes.

Alloying elements often added to steel are Si, Mn, Cr, Ni, Mo, W, V, Ti, Nb, Zr, Al, Co, B, RE, etc. In some cases, P, S, N, etc. Can play the role of alloying elements. In what state do these elements exist after they are added to steel? Generally speaking, they are either dissolved in the original phase of carbon steel (such as ferrite, austenite, cementite, etc.), or form a new phase that is not originally in carbon steel. Broadly speaking, they exist in the following four forms:

(1) Dissolve into ferrite, austenite and martensite, and exist in the form of a solute of solid solution.

(2) Forming a strengthening phase, such as dissolving into cementite to form alloy cementite, forming special carbides or intermetallic compounds, etc.

(3) The formation of non-metallic inclusions, such as alloying elements and O, N, S to form oxides, nitrides and sulfides.

(4) Some elements such as Pb, Cu, etc. are neither soluble in iron nor form compounds, but exist in a free state in steel. Carbon also sometimes exists in a free state (graphite) in high carbon steels.

02 The role of alloying elements

The alloying elements added to the steel have an effect on the properties of the steel by affecting the matrix phase of the steel and various forms of precipitation phases. Of course, it is the matrix phase that determines the performance. In steel, it is usually ferrite, bainite, martensite, or a dual-phase or multi-phase structure composed of different proportions, thereby forming different steel grades. kind of use.

(1) Elements that affect the formation of austenite 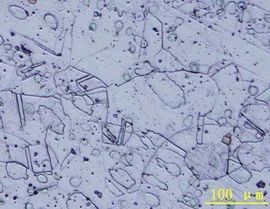 When the steel is heated, the normal temperature matrix phase ferrite tends to be in a thermodynamically unbalanced state, and finally transforms into a high temperature phase austenite, which is a diffusion-type transformation. The elements Mn, Co, Ni, which are infinitely dissolved in γ-Fe, and the elements C, N, and Cu that are infinitely dissolved in γ-Fe all expand the γ phase region, while the elements V, Cr, which are infinitely dissolved in α-Fe, and the finite Elements Ti, Mo, Al, and P dissolved in α-Fe reduce the γ-phase region, thus affecting the formation of austenite to varying degrees. Among these elements, C and N form interstitial solid solutions in the matrix phase, and distortion and temperature play a major role in their solubility. Other alloying elements except C and N enter the solid solution to form a substitutional solid solution, and the atomic size plays an important role in the solubility. Solute atoms are not uniform in austenite, but they are not randomly distributed, but have two phenomena: segregation and short-range order. The results indicate that strong carbonitride forming elements hinder the dissolution of carbides, such as MC-type compounds, NbC, VC, and TiC. It can also improve the diffusion activation energy of carbon in γ-Fe, slow down the diffusion of carbon, and have a certain hindering effect on the formation of γ-Fe. Weak carbonitride-forming elements w and Mo, and non-carbonitride-forming elements Ni and Co, favor the formation of γ-Fe. With the increase of heating temperature, the grain boundary segregation of alloying elements will disappear, the dissolution of carbides will be accelerated, and the diffusion uniformity will be realized. The driving force for grain growth is the difference between the surface free energy of the grains on both sides of the grain boundary. The elements C, P, and Mn increase the surface free energy, promote the movement of the grain boundary, and the grain grows.

(2) Elements that affect the formation of ferrite 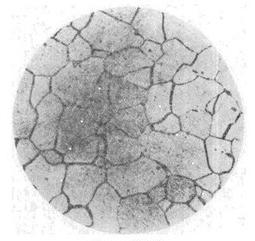 The ferrite mentioned here does not refer to the generalized α-Fe phase with different structures and forms, but only refers to the equiaxed α-Fe formed in the γ-Fe crystal and preferentially grown along the grain boundary. The transformation of austenite to ferrite is controlled by the diffusion process of Fe atoms and also by the diffusion of C atoms from the ferrite front to the austenite. Generally, the redistribution of alloying elements in the α/γ phase does not occur, but only the enriched and depleted areas of alloying elements appear at the frontier of the α/γ boundary, so the rate of ferrite growth will be higher. Under local equilibrium conditions, Mn, Ni, Si, Mo, Co, Al, Cr, Cu, etc. are the elements that promote ferrite nucleation.

(3) Elements that affect the formation of pearlite

Pearlite is a layered (or granular) mixed phase of α-Fe and carbides, and the transformation of pearlite is a process of nucleation and growth. The effect of alloying elements on the reaction incubation period, the formation of carbides, and the nucleation and growth of α-Fe is actually the redistribution of alloying elements. Therefore, Cr, Mn, and Ni elements increase the nucleation work and transformation activation energy, and realize the conditions of concentration fluctuation and energy fluctuation, resulting in the decrease of nucleation rate and growth rate.

(4) Elements that affect the formation of bainite 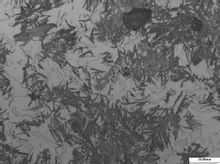 Bainite transformation is a semi-diffusive phase transformation completed between 550-250 °C. The transformation process is only the long-range diffusion of carbon without the need for redistribution of alloying elements. Carbon is the most important element that affects the formation of bainite; the comprehensive influence of elements Ni, Cr, and Mn reduces the temperature at which the maximum rate of bainite formation occurs, thereby controlling the bainite reaction; adding boron to molybdenum-containing steel can obtain a single The bainite structure; the elements V and Ti reduce the starting point of bainite formation.

(5) Elements that affect the formation of martensite

Martensitic transformation is a non-diffusion-type transformation that occurs when steel is rapidly cooled from austenite state at a lower temperature, and is one of the important means to strengthen metals. Most of the alloying elements dissolved in γ-Fe, except for the elements Co and Al, reduce the critical temperature Ms point of martensitic transformation, and the interstitial solid solution elements C and N have much greater influence than the metal solute atoms. The driving force of the martensitic reaction is characterized by the difference in the enthalpy of the alloying elements in the austenite and martensite phases.

The method of improving the mechanical properties of metal materials by refining grains is called grain refinement strengthening. Industrially, the strength of materials is improved by refining grains. Usually metals are polycrystals composed of many grains, and the size of grains can be expressed by the number of grains per unit volume. The greater the number, the finer the grains. Experiments show that fine-grained metals at room temperature have higher strength, hardness, plasticity and toughness than coarse-grained metals. This is because the plastic deformation of fine grains under external force can be dispersed in more grains, the plastic deformation is more uniform, and the stress concentration is small; in addition, the finer the grains, the larger the grain boundary area, and the more tortuous The more unfavorable for crack propagation. Therefore, in the industry, the method of improving the strength of the material by refining the grains is called fine-grain strengthening.

In low C-Mn steels, strong carbonitride forming elements such as Nb, V, and Ti effectively refine the ferrite grain size. The grain-refining effect of these elements and AI and N is usually used in normalized steel, but it has a more obvious effect in controlled-rolled micro-alloyed steel. The minimum average iron in the best controlled rolling state in the laboratory The grain size of the element body is 1-2 μm, while the industrial production is 5-10 μm. The microalloying elements Nb, V and Ti refine the grains mainly by the following mechanisms to inhibit the recrystallization of austenite: ① solute drag in solid solution; ② pinning of fine precipitates at γ grain boundaries; ③ deformation during deformation dislocation alignment within the grains. The result of these actions is to delay recrystallization of austenite until the austenite grains are subjected to greater deformation, greatly increasing the critical deformation required for the onset of gamma recrystallization, so that once recrystallization occurs, there will be higher nucleation rate, resulting in a fine grain size. Grain refinement is the only way to increase the strength and toughness of steel at the same time. About half of the strength of ordinary carbon steel comes from grain refinement. It can be seen that grain refinement is one of the most important strengthening methods in steel. Therefore, people have been working on the research of grain refinement through various means for many years. The grains of steel materials are refined to the μm or sub-μm range. The steel material is refined from the traditional grain size (10μm or slightly larger) to 1μm, and the strength will be doubled.

Precipitation strengthening refers to a heat treatment process in which the metal in the supersaturated solid solution is in the solute atom segregation zone and (or) the particles dissolved from it are dispersed in the matrix, resulting in hardening. For example, precipitation hardening treatment at 400-500℃ or 700-800℃ after solution treatment or cold working of austenitic precipitation stainless steel can obtain high strength. That is, when the supersaturated solid solution of some alloys is placed at room temperature or heated to a certain temperature, the solute atoms will aggregate or form a second phase in a certain area of the solid solution lattice, resulting in an increase in the hardness of the alloy.

Wudenalloy has focused on the production and manufacture of nickel alloys for more than ten years. We are a principal worldwide supplier of corrosion-resistant alloys and other superalloy metals. We have a professional technical team and after-sales service, so we can offer high -quality Hastelloy, Incoloy, Inconel, Monel, Duplex Stainless Steel, and other alloy material. These materials are available in wire, bar, sheet&plate, pipe&tube, flange, forging, and other forms to meet the needs of our customers.

Request a quote now to get the competitive special alloy prices, you can also send emails to sales@wudenalloy.com, Wudenalloy is your trusted supplier of special alloy material.

Ask a quote for the latest price and one of our team members will respond as soon as possible. Fields marked with * are required.